It is the company with the highest number of nominations in this edition of the event dedicated to circular economy in the tyre retreading and recycling sector.

Rovereto (TN) – Marangoni is, directly or through its subsidiary companies, in the running for six categories at the Recircle Awards 2022: Best Tread Rubber Supplier, Circular Economy Award, Best Tyre Retreader, Best Retreading Equipment Supplier, Spirit of retreading award and Employee of the year.

Recircle Awards is a global event established in 2021 to recognise the importance of the contribution to circular economy of organisations and people that deal with the retreading or recycling of tyres. Online voting is open to everyone until 18 March on recircleawards.com.

Following its prestigious recognition as “Best Tyre Retreader”, obtained in the inaugural edition, the company that leads the green tyre sector is particularly honoured to have been once more included among the finalists for the “Best Tread Rubber Supplier” category. Marangoni has always been synonymous with innovation and reliability, in particular thanks to the invention and continuous evolution of the RINGTREAD System: a technology that, compared to traditional systems, makes it possible to efficiently manufacture tyres with premium quality performance and a lower environmental impact.

In this year’s edition, Marangoni is also competing for the new “Circular Economy Award”. The transition from linear to circular economy is an absolute priority for the company which, for all intents and purposes, has been practising circular economy for over 75 years, even before the term was invented. A commitment for the environment that has been proven by the recent renewal of the ISO 14001 environmental quality certification for the Rovereto site.

TRM represents the Marangoni Group in the “Best Retreading Equipment Supplier” category. As well as developing for Marangoni the retreading technologies of the RINGTREAD System, the subsidiary company based in Ala (Italy) is known around the world for manufacturing machinery that stands out by dint of its strongly innovative features (in the key of Industry 4.0) and by the continuous improvement in finished product quality.

“Spirit of Retreading Award” is an award introduced in this edition to shine a light also on small, medium, and regional retreaders. The finalists of this category include Gummiservice Produksjon, a Marangoni Group company that operates in Norway with a production plant, four outlets, and a mobile assistance service.

Voting only takes a few seconds and is a way of supporting a sector that makes a concrete contribution to environmental, social, and economic sustainability. The winners of this edition of the Recircle Awards will be announced on 25 April 2022, during an online event. 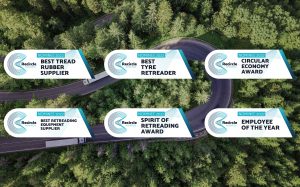