A major milestone for the leading Romanian RINGTREAD network member.

The leading Romanian RINGTREAD network member, which operates as Bedelco East Europe srl, was founded in 2005 and, since the beginning, focused on premium quality truck tyre retreading by choosing Marangoni’s RINGTREAD System.

The gift was delivered by Daniel Brichta, Area Manager of Marangoni Retreading Systems, to Mr Mihai Ionescu, Executive Director of Bedelco East Europe srl, during a recent visit to their plant (see photo).

Thanking Marangoni warmly for the much-appreciated present, Mr Ionescu declared: “RINGTREAD was key to develop our position as a leader in the Romanian truck tyre segment. In 2020, we’ll keep focusing on high-quality retreading, since it is an important part of our business.”

Bedelco East Europe owns a retreading facility with a capacity of 18,000 retreads per year, reached after the addition of a second TRM autoclave and a shearography machine. The company operates through a network of four sales outlets located in Bucharest, Arad, Constanta and Ploiesti. 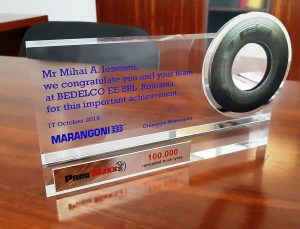 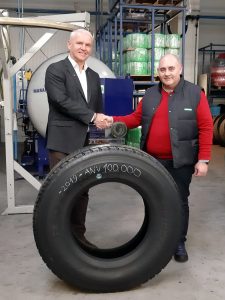