The company increased its share from 25% to 51% since the beginning of the year.

Rovereto (IT) – The Marangoni Group is pleased to announce the acquisition of the majority shareholding in the South African tread maker Leader Rubber Company SA (Pty) Ltd.

The partnership between Leader Rubber and Marangoni has been ongoing for more than ten years and recently has been reinforced with the objective of further developing agreements with local retreaders and growing exports to markets in Sub-Saharan Africa.

Matthias Leppert, Marangoni’s EMEA Sales Manager, said: “In 2018 the two parties agreed on an investment by Leader Rubber to set up a ring production line in Johannesburg dedicated to the RINGTREAD dealers operating in these regional markets and, since its execution, a positive trend in sales was established.”

Leader Rubber Co. S.A. is the exclusive distributor of the RINGTREAD System to the South African market and is the leading manufacturer of precured tread strips, OTR uncured rubber as well as consumables and machinery required for the retreading process. The company hold a prominent market share in Sub-Saharan Africa.

Marangoni is increasing its share from 25% to 51%, with the objective of consolidating and strengthening Marangoni Group’s presence in South Africa and in all the Sub-Saharan markets, backed by the strength of its RINGTREAD System, the superior precured retreading technology increasingly widespread and recognised around the world. 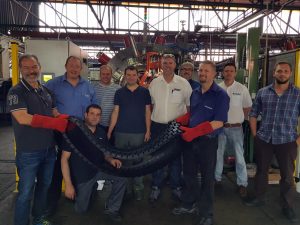