The plant in Rovereto, really is the “heart” – operative and strategic – of Marangoni Group.

Rovereto (IT) – After the recent appointment of Martin Kalagin as the new head of the Central Technical Service of the Retreading Systems business unit, a further confirmation of this fact comes from a meeting that took place in Rovereto several weeks ago. The purpose of this  semi-annual meeting, is to take stock of the latest news and sales strategies and it is attended by the most important Managers and Executives from Marangoni’s European offices present at Rovereto.

“This meeting – explains the CEO of Marangoni Group, Dino Maggioni – takes place at Rovereto, the headquarters, to promote contact and communication between corporate functions, central research and development, and the sales force that Marangoni in Europe, the Middle East and Africa for the development of sales strategies in international markets.”

During two intensive days of work, special certificates were presented to four “long-standing” employees of the company: Roberto Santorum and Mike Carter, who have been with Marangoni for 40 years; Luciano Meta, for 30 years; Christian Asmuth, for 25 years (below you will find biographical notes for each of them). On the occasion, the group also held a formal dinner to mark  the retirement of Engineer Giuseppe Ferrari, who, at the beginning of the year, stepped down in favour of  Christoph Frost to manage Indirect Retreading EMEA.

During these two days, two important appointments were also announced: Gianluca Merlo, besides managing the plant at Rovereto, takes on the responsibility of Operations Italia, thus also managing the plant in Ferentino.  Human Resources of the entire Group will from now on be managed by Michele Bergese (you can see his profile below).

“On the one hand, this Group is lucky to be able to count on the vast experience and professionalism of people who have spent their working life for Marangoni, and on the other, to leverage the enthusiasm and freshness of new generations of managers to build Marangoni for the future” adds the CEO Dino Maggioni.

He started his career in 1990 as a HR Specialist at Magneti Marelli (Fiat Group) In 1996, he developed his role in the International HR Management in Groups such as Beloit Corporation; Agilent Technologies and MGI Coutier, both in Italy and overseas (USA and France) where he developed overall experience in all aspects related to Human Resources tools and policies. Based on 15 years’ experience in HR, in 2004 Michele joined Finmeccanica Group as HR Manager of Oto Melra SpA and, later, of Ansaldo Energia SpA. In his most recent experience, Michele returned to the Automotive sector by taking on the role of Human Resources Director of Sogefi Italy SpA. He is married and has two children, a 9-year old boy and a 22-year old, he graduated at the University of Turin in Psychology and completed a Masters in HR management at the New England School of Business in Boston, USA.

He joined the Marangoni Group on 1st September 1977 with his employment at Marangoni Meccanica Spa. In March 1991, he was transferred to Marangoni RTS Spa (now Marangoni Spa) filling the role of Sales Development Manager for the Indirect Retreading Division. He is currently in charge of Business development of indirect retreading of numerous markets, both European and non-EU.

Mike Carter began collaborating with Marangoni Group in May 1977 initially in technical assistance and subsequently expanding his expertise in the sales area of products for indirect retreading. Since 1997 he has been the Managing Director of Marangoni Tread UK (known as RTS Ltd prior to 1999), a subsidiary of Marangoni that, besides sales, also takes care of distribution and technical assistance in the United Kingdom.

Employed by Marangoni Tread (now Marangoni Spa) on 1st September 1987, he is the Sales Manager of products for indirect retreading in the south of Italy.

Since 1st October 1992 he has been working in sales in Germany at Marangoni’s subsidiary, Retreading Systems Deutschland gmbh. In 1999 he was appointed Sales Manager of markets managed directly by MRSD (at the time known as Ellebrock). He is currently Sales Manager of products for indirect retreading for the German, Austrian, Swiss, Scandinavian, Benelux market and east European countries.

Attached is a photo with the people who received the certificates:

In the photo from the left: 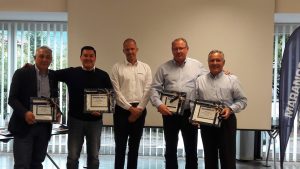