The growing tyre retreading company have signed a deal with Lujakumi Oy, whose headquarters and production centre are in Pori on the country’s west coast, to take their premium RINGTREAD System into new territory.

Lujakumi Oy are members of the Point S network and have a large independent customer base around Finland and Åland, the Swedish-speaking archipelago in the Baltic Sea. The company, which was set up in 1954, is managed by the second generation of the Lujala family. Originally offering tyre service, tyre repair and a hot cure retread process, the Finnish company have been involved in the precure process since 1968.

With more than 60 years’ experience of retread production, Lujakumi Oy are one of the most experienced tyre retread companies in the whole of Europe. Renowned for their service facilities and the supply of high quality products to the marketplace, they have a workforce of 30 highly dedicated, professional and motivated employees.

The severity of the weather in winter means grip and traction are key factors in the Finnish market and Lujakumi Oy will now use the latest and most modern technology provided by the RINGTREAD System to retread premium quality casings from the most reliable new tyre brands and manufacture retreads with outstanding performance.

Lujakumi Oy Managing Director Hanna Maja welcomed the partnership agreement, and looked forward to being able to offer the world-class Marangoni premium RINGTREAD System to customers in Finland. She said: “In our sector there is ever growing competition, and customers are demanding higher efficiency from the products we supply and install. Here at Lujakumi Oy we looked for lower rolling resistance, fuel consumption efficiency, traction, and higher mileage from our retreads, so we can provide increased performance and low costs per kilometre to our many customers.”

Ms. Hanna Maja further explained: “That’s the reason why we have taken the decision to use the premium RINGTREAD System from Marangoni. Going forwards, we will be able to satisfy the demand from fleet customers to meet the need for improved quality and better efficiency, due to our new partnership with Marangoni.”

Lujakumi Oy and Marangoni are both looking forward to a long and successful cooperation. 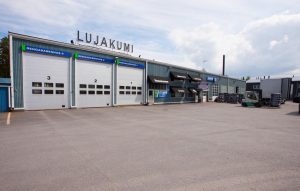