Marangoni is at Autopromotec 2017 with a space dedicated to the benefits of retreading, to promote a more efficient use of the planet’s resources.

Rovereto  (IT) – Marangoni’s participation in Autopromotec 2017 (Bologna, 24-28 May) is not only focusing on the core business of retreading but demonstrates how the Group has placed its core long-term vision of contributing to the transition from linear economy to circular economy, for a more efficient use of the planet’s resources. A key transformation that is currently affecting all production and consumption patterns worldwide, including the tyre industry.

In addition to the two stands of the Marangoni divisions operating in this industry sector, a third exhibition space is fully dedicated to the benefits of retreading in the circular economy sphere. The exhibition, located in Hall 15, is designed to invite visitors to reflect on a sustainable system, perfectly in line with the definition of the Ellen McArthur Foundation – “an economy designed to regenerate on its own”. It is a system in which all activities, starting from extraction and production, are managed so that someone’s waste becomes someone else’s resource.

Not everyone knows that it takes 100 years for a tyre to degrade. Through retreading, tyres can acquire extra “lives”, thus considerably reducing their disposal rate. According to estimates made by Marangoni, based on the aggregation of data from major tyre retreading associations, retreading enables savings of 4.55 million tonnes of tyres every year, which are not emitted into the environment, as well as 3.90 billion litres of oil and other derivatives, and Euro 8.45 billion in the transport industry. These figures are contained in an infographic located inside the exhibition space, near an exhibitor that lets you touch the “ingredients” of this industrial process by hand:

– a used tire, the raw material for retreading;
– a  buffed tyre-casing, from which the worn-out tread rubber has been removed
– a RINGTREAD tread, the Marangoni precured ring used  all over the world;
– and finally, a retreaded tyre made with this technology which is comparable to reliability and performanceof a new tire.

Today, in the tyre industry, we identify many of the typical features of the linear model in the imports of products made in Asia, as opposed to the circular model based on retreadable products. It is a contrast that we experience daily at Marangoni, since the market is now invaded by low quality tyres characterised by poor retreadability, which means they are not capable of more than one “life”. These are therefore “disposable” products which, besides damaging our  sector, that  employs thousands of people in Europe,  translates into huge amounts of waste.

It is therefore not only an economic issue, but also a cultural one. It is, a contrast between diverging ideas, values and ethical principles. Responsibility, environmental sustainability and generational pact: these are just some of the principles that, nowadays, manufacturers worldwide are expected to follow.

The exhibition is therefore aimed at making people aware of the proven environmental benefits (30% reduction in CO2 emissions and 70% savings on tyre original materials) and economic of the retreading (we are talking about savings of up to 35%), reassuring the reliability and performance issues approved retreaded products. A technology that reconciles with the environment and therefore the possibilities offered by a circular economy aimed at recovering materials and reusing industrial products, and not their direct disposal.

As evidence of the key role that these aspects play in the company’s policies, values and business vision, the exhibition dedicated to the theme of circular economy will be permanently hosted also at the headquarters of the Marangoni Group in Rovereto (TN). The Marangoni Group supports the theme of retreading for the benefit of environmental respect not only at trade fairs such as Autopromotec but by taking part in events such as the next Economic Festival  (Trento, 1-4 June 2017) and through partnerships with business that are attentive to these topics such as Trento’s MUSE (Museum of Science) . This initiative is part of a key historical phase for Marangoni, which for the last few months has been busy working on a series of innovations, not only in terms of production, but also in terms of internal organisation, searching for new partners, developing the offer of services and of opportunities that will be available in new international markets.

Hence, “innovations”: used in the plural to indicate the current need for a diverse commitment, both inside and outside of the company. On our planet, linear consumption is reaching its limits. The linear production and consumption model has dominated the last century and a half of industrial history, exploiting natural resources to produce goods, which are then sold, used and disposed of as waste. This is why the transition to a circular economy, through innovations, is an opportunity that the industry cannot afford to miss. 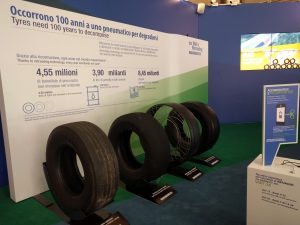