Marangoni welcomes Däcknor AB, based in Strömsund, Sweden, as partner in its RINGTREAD network.

Rovereto (IT) – Marangoni Retreading Systems is pleased to announce the expansion of its market presence in Scandinavia, thanks to a new partnership with Däcknor AB, one of Sweden’s leading quality retreaders.

The roots of Däcknor extend back to the year 1944 when their first tyre dealing and retreading activities started at Strömsund, Sweden. Since then Däcknor has successfully grown to become a very important player in the Swedish and partially the Norwegian market with a strong focus on retreading.

Recently Däcknor has decided to face its future challenges by integrating Marangoni’s RINGTREAD in its product range. Däcknor’s offer has always been based on premium products and high quality and by taking this step, its offer will be even more competitive.

Magnus Elverum, CEO of the Swedish company, clarified the reasons for this choice as follows: “We felt the need to further upgrade and differentiate our product range in order to meet future challenges on the highly competitive Swedish market. With RINGTREAD we enlarge the offer to our customers based on the most advanced retreading technology, modern tread patterns and very high quality.“

Marangoni’s RINGTREAD will add additional value to Däcknor’s commercial offer and strengthen the position of the new partners in the Scandinavian market. 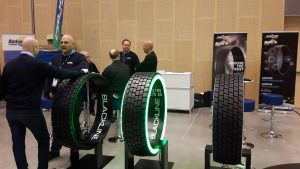