Rovereto (Italy) – Mr. Dino Maggioni, 48, manager with a long international experience in the industry and namely in the automotive sector, is the new Chief Executive Officer of the Marangoni Group.

The new CEO was appointed by the Company Board after the approval by a shareholder meeting that also modified the company statutory charter to increase the number of directors to eight board members. The shareholders along with the board of directors gave their appreciations to former CEO Massimo De Alessandri for his commitment to the company.

Dino Maggioni graduated in electronic engineering at Politecnico di Milano. After the experiences in STMicroelectronics and in Ingersoll Rand in 2001 he joined Magneti Marelli where he was given growing responsibilities: initially in the Electronic division, then as Senior Vice President of Purchasing and, from 2007, as CEO of Magneti Marelli Aftermarket Parts & Service. In 2012, in addition to his role in the aftermarket, he became President of Magneti Marelli South America and started the reorganization of the businesses in the Region. In November 2012 Mr. Maggioni was appointed Brand President Parts and Service and Head of the Business Unit Precision Solutions and Telematics, becoming at the same time Member of the Group Executive Council of the newly created CNH Industrial operating across the several Brands and Regions of the Group. In 2015 he left CNH Industrial to join the tire maker Pirelli with the objective of completing the separation of the Industrial Business and where he became CEO of Pirelli Industrial North and South America at the time of the acquisition of the Italian Company by ChemChina.

The appointment of Mr. Maggioni is consistent with the strategy envisioned by the family holding of handing over growing responsibilities to managers chosen in the market, highly skilled and qualified.

Chairman Vittorio Marangoni stated that: “With the arrival of Dino Maggioni our Group will take advantage of his experienced leadership in the automotive sector and proved managing capabilities. On behalf of the Board and our entire Group, I am glad to welcome in our Company the new Chief Executive Officer. I confirm to him my full personal trust and the one of all the employees, who are excited to contribute to implementing the business plan aimed at completing our ongoing strategic repositioning. This will allow us to successfully overcome the future challenges in the global tire market”. 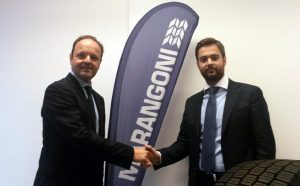