For more than 40 years RINGTREAD has been the benchmark for high quality retreaded tyres, synonymous of reliability, performance, cost and environmental impact reduction. A new promotional campaign celebrates these Ringtread unquestionable own values.

Rovereto (TN) – RINGTREAD, a Marangoni trademark retreading system, is the champion of a new promotional campaign: Spliceless is better. The straightforward slogan teams up with a clear and impactful image, a chain that needs the strength of each link to endure.

And, as for performance, RINGTREAD simply has no equals. The first key element of the Marangoni cold retreading system is its ring shape, which means absence of splice therefore no weak points, but the advantages certainly do not stop here. Thanks to the development of specific compounds and tread designs as well as continuous technological improvement, RINGTREAD offers maximum grip, high mileage, and lower rolling resistance resulting in lower fuel consumption. Essentially, performance comparable to a new premium tyre. Then, don’t forget to add the advantages of tyre retreading in terms of economic savings and reduced environmental impact.

Spliceless is better is a communication “return to the origins” of the greatest cold retreading system in the world, for over 40 years synonymous of reliability and performance. The new campaign aims to send a clear and easy to understand  message and to prove the renewed commitment in the Marangoni Group’s promotional efforts.

Already published in major trade press and on the website marangoni.com, the new campaign was unveiled during the Reifen 2016 industry fair in Essen and it’s aimed for a worldwide distribution. 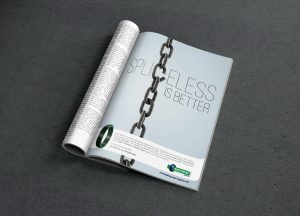