There was great attention and interest in Cuba for the quality Retreading solutions proposed by the Marangoni Group during the GEIQ conference at PABEXPO held from the 20th to 24th of June 2016.

Havana – For some time the Cuban and world industry awaited the positive effects of the thaw between Cuba and the United States and finally the agreements signed in 2015 are beginning to bear fruit. In the wake of renewed enthusiasm, Marangoni Group has returned from participating in its first Cuban Industry Exhibition, held from the 20th to the 24th June 2016 in collaboration with Rovimpex Novaledo. Mr. Luigi Pedrini’s company has been a key partner for this particular market over the years in which, until now, the products marketed by the Marangoni Group concentrated on precured tread strips.

This event represented the ideal opportunity to present the RINGTREAD System, the only retreading process using spliceless precured tread rings.

The advantages of the ring technology are that it enables a tyre to be retreaded like no other and to match or exceed even new products in terms of reliability and performance. This technology was illustrated to the Cuban industry in general, to the Poligom (Rovimpex long-time customer of retreading products) management in particular, and Comandante Ramiro Valdés, Vice President of the Government of Cuba and former Minister of the Interior.

During the event, visitors and experts demonstrated great interest both in the Marangoni Group stand and during the tyre retreading conference promoted by GEIQ (Grupo Empresarial de la Industria Química), attended by the most relevant players in the sector.

Giovanni De Bei , Marangoni Marketing Manager stated that “a wave of optimism and excitement is now inviting us to participate in a market that we have known for years and which is experiencing an important opening”. He noted further that “Cuba’s interest in development and technology can provide important business opportunities. Participating at the Cuba Industria Fair, we wanted to signal our willingness and ability to offer quality solutions, thanks to the experience and professionalism of our partner, Rovimpex Novaledo”.

Ferruccio Morellato, Marangoni’s longtime agent, who is well-acquainted with Cuban industry and Rovimpex says “I believe that the future development of retreading in Cuba will give satisfaction to both industry and the transport sector, because what has been implemented to date has provided excellent results, also for the professionalism of all the employees of the retreading chain”.

The Cuba Industria Fair is a very important opportunity to take the pulse of the development of the nation and its market after the conclusion of the US long embargo. Cuba can now look toward a future of grow, both quantitatively and qualitatively, with increased optimism. 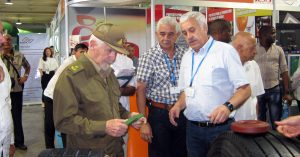