Thus, the Board of Directors is constituted as follows:

The appointments of Vittorio Marangoni for the Presidency and Giuseppe Marangoni for the Vice-Presidency are a significant development in the generational transition of the Group and the result of a process which began in 2011.
The appointments reflect the renewed commitment of the owners to guiding the Group through an important period of its history, with the aim of fine-tuning the strategic repositioning underway in order to enable the company to successfully face the new challenges resulting from the globalization of the tyre industry.

Vittorio Marangoni holds a Management Engineering degree from the Politecnico di Milano. He has taken part in the governance of the Marangoni Group for a number of years, initially as a member of an internal committee and since 2015 as a member of the Board of Directors responsible for extraordinary transactions. Currently, he is the managing director of the financial holding, Marangoni Holding S.p.A. as well as a member of the Board of Directors of different industrial, financial, and real estate companies. Vittorio Marangoni is also the Vice President of the Young Entrepreneurs group of the Trento local branch of Confindustria.

Giuseppe Marangoni, 46 years old, BS and MBA, joined the group in 2000, initially in the parent company and later at Marangoni Tread North America, Inc. where he worked as Operation Manager and Controller. In 2008 he returned to the parent company to hold the position of Supply Chain Manager and Corporate Purchasing Director of raw materials for all the group’s production units.

Salvatore Torrisi, 54, is founder and Executive Chairman of Icube, a co-investment and venture management company. Previously, he was Managing Director of UFI Filters S.p.A., a leader in filtration solutions for automotive and industrial applications, Managing Director of ITT Motion Technologies, COO of the FIAMM Group, and director of the cables division at Pirelli. 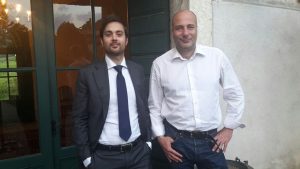