With the continued development of new designs, Marangoni is focused on providing top quality retreads, thus consolidating its Blackline rings line, the ultra-performance range of its exclusive Ringtread system.
Two years after its introduction to the market and with a 30% share of all Ringtread rings sold, the Blackline series is already a success with increasing sales trend.

Blackline is Marangoni’s response to the evolution the market has undergone in recent years, where fleets in particular have been demanding retreaded tyres, with reliable performance, improved durability and rolling resistance which is comparable or superior to quality new tyres in order to guarantee much needed savings.

When the topic is tyres, the current market is indeed paying increasing attention to reliability, operating costs, downtime, fuel consumption, and tyre costs. For these reasons, top quality retreads, that are reliable and efficient, able to maximize the value of retreadable casings, or a serious alternative to new quality tyres at an affordable price are favoured.

The ambitious objectives of the Marangoni Group’s Advanced Research Division during the development of the Blackline range of products, was to achieve at least a 15% increased mileage, a 10% reduction in rolling resistance, a 3% reduction in consumption, as well as a 10% increase in adhesion and, for the on-off road tread, a 20% increase in mechanical wear-resistance. Those goals were actually exceeded through the use of new materials, increased natural rubber content, a new generation carbon black perfectly incorporated in the compound through a revolutionary mixing process, and a new generation of moulds.

The superior quality of the Blackline product, expands the utilisation of Retreads into high performance areas, on extreme low-aspect ratio tyres, or tyres in heavy duty applications, where use of standard Retreads had never even been considered, before Blackline Rings became available

Currently the Blackline range consists of 13 tread patterns, with two new ones to be added shortly: the RTL FE trailer, and the RDL FE drive, intended for long continental routes and both characterized by excellent rolling resistance and durability.

The RDR HM3 pattern is intended for the drive axle of high-power and torque vehicles, primarily operating on domestic and regional routes, especially in harsh conditions.
It has provided impressive results with regard to durability. Testing has shown that the new RDR HM3, in comparison with tyres featuring the same pattern and intended use, produced outstanding results with up to +20% of increased mileage. The  tread-width has been increased by 10% compared to previous generation products and the high “material/void” ratio ensures high mileage and excellent traction. This performance allows the Blackline RDR HM3 to be a direct competitor to even the best new tyres on the market today.

The ICE100 line is the new studdable design for drive axles, developed according to the higher Blackline standards. It is a product developed for use in extreme winter conditions, especially on icy roads, and mainly for vehicles operating in long distance application. The pattern is characterized by heavily siped blocks and an open shoulder row, designed to cut into the ice and provide excellent traction with, or without the use of spikes under exteme winter-conditions

WSS, the new Blackline ring line for supersingles launched in 2015, has a linear design for non-driving axles and features the 3PMSF marking to indicate that it meets the demands of a market requiring greater safety, especially in winter conditions. The “twisterlock” technology siping, the square profile to maximize the footprint on the ground, transverse grooves on the shoulders, and ultra high-performance compounds for all conditions of use, provide excellent overall performance.

The Blackline range is currently available only from selected retreaders, able to guarantee process and control standards at the highest levels. In the short-term, we plan to increase the market-availability of this premium line, thanks to a training program for a wider portion of retreaders in the Marangoni network, in order to increasingly satisfy the market needs. 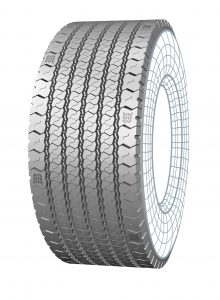 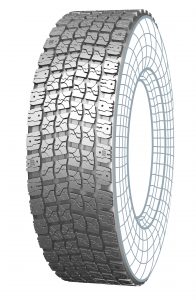 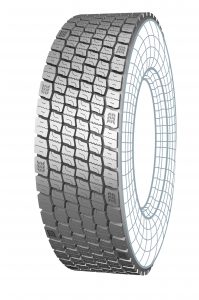