Marangoni recently celebrated the 40th anniversary of the start of industrial production of the RINGTREAD, which revolutionized the tyre retreading process.

In May of 1976, Marangoni inaugurated its first plant for the production of rings in Ferentino (Italy). The concept arose from an idea destined to revolutionize the cold retreading system: the construction of a precured tread ring to be applied on truck tyres. The advantages of the new technology were immediately apparent: to begin with, the tread ring is precured in a circular shape, so as to adhere perfectly to the tyre. Moreover, tyres retreaded, using the ring are spliceless, and thus the most obvious limitation of flat strip retreading had been eliminated. The result of this retreading technique is therefore a retreaded tyre that – with regard to appearance, performance, and durability – is comparable to a new one.

Marangoni currently operates five production plants: two in Europe (Ferentino and Hamburg), one in the USA (Nashville), one in Brazil (Belo Horizonte), and one in Argentina (Rosario).
In 2017 a new ring production unit will be opened in South Africa. This future plant will allow Marangoni to further strengthen its globalization strategy, establishing a bold presence on a continent with considerable growth potential: a domestic market consisting of two million units of new and retreaded tyres, proximity to markets with rapid growth rates, and easy access to markets in the Persian Gulf and Asia.
In contrast, Marangoni’s current presence in India is still in a setup-stage, but has already materialized in a local Joint venture, with the task to develop and offer a Marangoni Retread-franchise system for the Indian market. The aim is to take advantage of the ongoing strong growth in the use of radial truck tyres in India, thus offering high-tech opportunities for future partnerships.

Marangoni controls 25% of the European market for cold retreads through Ringtread and is acquiring an ever more significant share in the world markets in which it operates: in North America 5% of the total, considering only the market not dominated directly by new tyre manufacturers the figure stands at 20%; in South America, Marangoni holds 5% of the overall market and the trend seems to be set for strong growth which will reach 10% of the market, a share already achieved to date in the combined markets of Brazil, Argentina, Chile, Paraguay and Uruguay where Marangoni is currently operating.
Despite a relatively slow initial roll-out period (1976 – 1995) characterized by a niche presence, from its establishment to date globally about 40 million casings have been retreaded with Ringtread technology.

With Ringtread, Marangoni supplies a product, compatible with the current market situation: a product that is the result of highest technology and a continuously evolving process, that generates more profit for retreaders and more savings for Fleets – A product, which guarantees lowest cost per kilometre at the reliability level of new tyres.

In fact, Ringtread is the only retreading system that uses precured tread rings produced in a seamless circular shape, which adhere to the casing without any tension or deformation of the tread design, while ensuring maximum performance: great traction on challenging road surfaces, low rolling resistance resulting in fuel savings and high mileage, all thanks to the greater precision and directional stability of the product caused by the non-distorted siping and tread block-shape of the actual pattern on the ground. Ringtread is certainly the only real alternative for those who are looking for performance levels that are similar, or even superior, to those offered by the leading new tyre brands. 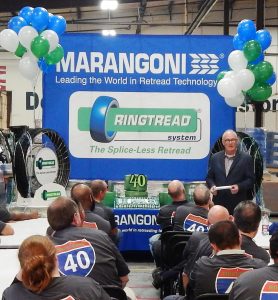