Having invested in a state of the art 300 Ton purpose built tyre press and initial stock of Italian premium brand Forza industrial tyres, followed up by a substantial increased repeat order, tyre sales and the promotion of the Forza name in the market, Al Shirawi Enterprises was rewarded with a new exclusive contract with the Italian manufacturer with a view to growing the name and brand image in the region.

As OEM supplier to Toyota for many years and already having tyre approval in the forklift truck industry with the likes of the Kion Group which represent Still & Linde forklift trucks, along with Jungheinrich forklift trucks, Marangoni are well respected and known throughout the industry across Europe. Building on that success they are now wanting to move into new markets and expand the brand name. With premium brand tyres like the Forza and Eltor range which are produced in their factories in Italy and Sri Lanka, they are able to produce in excess of 450’000 tyres per year into the industrial tyre market.
With a dedicated marketing team now in place, Al Shirawi are looking forward to being able to really push the brand to a new level in the region and hopefully see the Forza range of tyres as the number one in industrial tyre choice when it comes to replacing your forklift truck tyres.

Marangoni Industrial Tyres is the Marangoni Group business unit that has been operating in the segment of forklift truck and similar tyres for more than thirty years. The company’s main reference market is Europe, where it has double-digit market share and extensive presence: in addition to headquarters in Rovereto, the company has operations in Germany, through Wenzel Industrie, and in France, through Marangoni Industrie Manutention; companies that are set-up to guarantee on-site fitting, where necessary. Considerable growth has also been seen in the Americas, Africa, Asia and the Middle East, following the opening of a production plant in Sri Lanka in 2008, bringing a significant increase in production capacity. 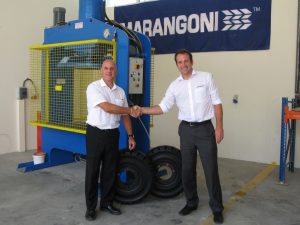