Backed by an economy that is growing much faster than Europe’s and occupying a strategic position for trade in commodities and energy resources between Europe and Asia, Turkey has for some time now represented one of the main European markets in terms of road transport tyre consumption and retreading, the latter almost exclusively using precured technology.

With 400,000 retreads a year produced by around 80 retreaders, Turkey is the sixth biggest European market in terms of the total number of retreads and the second after Germany concerning cold retreading technology.

The combination of these factors and the ease of access to the Turkish market means it is also very competitive in terms of the offering of retreading materials, with several local manufacturers operating alongside various European and other foreign players.

For more than ten years now, Marangoni Retreading Systems has been doing business in Turkey through its own branch, Marangoni Kaucuk Ticaret, located in Izmir. As well as accounting and logistics, this company supports local customers through a sales and service network, serving around 15 medium-large retreaders, the majority of which also deal in the distribution of new tyres.

The presence of several important retreaders within the Marangoni Kaucuk Ticaret network has helped it achieve a market share of 17%, mostly accounted for by the Ringtread retreading system. As stated Osman Bayik, manager of the Turkish subsidiary who has overseen its development since it was established: “RINGTREAD technology offers Marangoni Retreading Systems’ partners an important source of growth and profits, as users can be offered an exclusive product and the highest quality”.

Within this context of growth of the Turkish market and the Italian company’s operations in the country, Marangoni Retreading Systems announced and presented, during its Dealer Conference held last spring, a series of visits to its Italian plants by the main Turkish customers, beginning last week.

Over the four day trip to Italy, the first group of Turkish customers visited the Marangoni retreading plant in Rovereto (TN) and subsequently the TRM/Marangoni site in Ala (TN); visitors were shown the latest machinery developed by the company and the after-sales services provided for both machinery (Global Machinery Service) and retreading process.

The trip then continued to Florence, in Tuscany, with a visit to Fedi Gomme, the Marangoni Group company that offers contracts to fleets based on mileage cost. Here a workshop was held on outsourcing tyre management, during which the participants shared experiences and information on the types of hardware and software tools needed to professionally provide this type of service to fleets.

At the end of the meeting, a visit to Florence and the Chianti hills, before leaving for Rome, to visit the Ringtread production plant (Ferentino), where the trip ended. 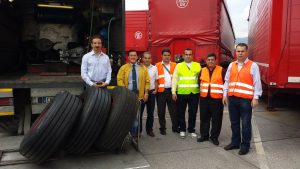 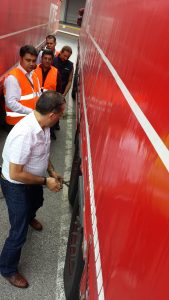