For the Marangoni Group, Autopromotec 2013 – to be held in Bologna from 22 to 26 May – will once again this year be an event with the focus on meetings and hospitality for its numerous Italian and international customers.
At its large exhibition space in Hall 22 – Stand A 46, the Italian Group will be presenting the latest news from its different divisions. Despite being intended for different segments and having their own specific identity and image, the products on display at the Marangoni stand will be joined by the thread of technical research and innovation that has always defined the company’s product offering.

As concerns tyre retreading, the sector in which the Italian market accounts for most of the Group’s business, important new additions have been made to the MARIX range of retreads, including: the MD National Grip 3 for regional heavy transport, and upgraded compounds mainly in the Energeco line for long distance applications. For the earthmoving sector, the MDT Recaflex pattern, available in size 27.00X49 for heavy-duty dumpers. Other products on display include patterns for 4x4s, SUVs and vans, representing a wide range that has been expanded even further.

Backed by the strength of its RINGTREAD System precured ring retreading technology, increasingly widespread and recognised around the world, in order to face the ever growing market demands to limit fuel consumption, extend product life and improve grip in the presence of rain or snow, the Retreading Systems division has recently released a new line of rings called RINGTREAD BLACKLINE. The new range comprises 9 new tread patterns, mainly designed for the long-distance and regional segments, however without neglecting passenger transport and quarry-construction site applications.

MARANGONI Car Tyres, the Group’s division that manufactures and markets new tyres for passenger cars, vans and SUVs, all 100% made in Italy, at Autopromotec will be presenting its range of Ultra High Performance tyres, including the M-Power summer tyre designed to highlight the performance features of supercars and sports cars, as well as the Meteo HP SUV, a high performance winter tyre for SUV and crossover, designed for continental European climates.
Finally, Marangoni will also be exhibiting its latest show car, the Toyota GT 86-R Marangoni Eco Explorer, the quintessence of elegance, fashion and sport, but also environmental-friendliness, fitted with the experimental version of “M-Power EvoRed”, a special set of flame-red 19” tyres. 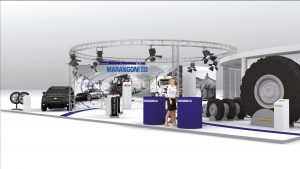