One year ago MTNA invested $7,500,000 to construct a plant in Madison Tennessee to produce UNITREAD. A year later Bill Sweatman, President and CEO and Chanthavy Vongsamphanh, Manufacturing Manager for MTNA recognized the first year accomplishments with a ceremony for the plant employees.

In Sweatman’s address he explained the purpose and significance of this accomplishment.

“Since the overall truck tire retread market in North America is expected to continue to grow, in order for us to maintain and grow our market share we had to add capacity. With this added production we can provide material for well over a million retreads annually. There is a great advantage to producing here in the U.S. rather than importing. Flexibility and responsiveness are big competitive advantages for us as well as our customers.”

“We now have 60 Retreaders in North America using Unitread and have produced over 150,000 units. Both the growth in volume and the addition of so many new customers has been very gratifying”

Chanthavy, added in his remarks that he was very proud of how so many employees have contributed to our success.

“We made a good decision by investing in Unitread production here, we have made great progress in our first year; in production, quality, sales and distribution development and… the Best is Yet to Come, Congratulations to All!”

The ceremony was also attended by Cathy McKellar, Vice-President of the Old Hickory Chamber of Commerce that took this occasion to commend Marangoni for their contribution to the community for their positive environmental impact.

In 2002, Marangoni Tread North America moved from California to Madison, Tennessee in order to expand their market reach for independent dealers. MTNA chose a 150,000-square-foot facility in Madison, TN, as the site for their first North American manufacturing plant in 2004. Today, the headquarters facility houses the corporate offices as well as the manufacturing and warehouse operations.  MTNA has since grown to more than 4 percent market share and became the fastest growing tread manufacturer in North America.

Over the past 10 years, Marangoni Tread North America has built a loyal customer base in the United States and Canada, significantly increasing unit sales and growth. As the product demand continued to rise each year, the company decided in 2010 to make an even stronger commitment to the commercial trucking industry by establishing themselves as a full-service supplier and a total solutions company for both retreaders and fleets in N.A., this decision lead to the construction of the UNITREAD manufacturing line in America.

Marangoni is the only independent tread manufacturer in US and Canada not owned by a new tire manufacturer.

Unitread is different from other precured treads in that it is offered in a cut-to length size so each roll is used for each tire retreaded.

Unitread is a complete product line and is offered in 16 different and distinct designs in different length options to meet the needs of demanding fleets. 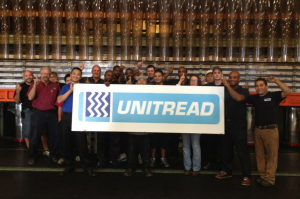