The Marangoni SpA Commercial and Earthmover Tyres division recently held its annual convention. The venue was the historic Rovereto site, where all Marix retreads are manufactured. More than 90 people attended, including employees, Italian sales representatives and colleagues from the sales, logistics and industrial departments.

“We’re going through a period of massive changes – at all levels of society, the economy and work – changes that can only be faced with knowledge, courage and determination. Marangoni possesses these qualities, and we are therefore confident that we can interpret these changes in the best possible way”.
These were the opening words from Brenno Benaglia, Sales Director at the Marangoni Commercial & Earthmover Tyres division, summing up in just two sentences Marangoni’s positive attitude to the challenges of the market.

The same attitude was also stressed by Massimo De Alessandri, Marangoni Spa CEO, who in his opening speech recalled the values that make up the company’s DNA: innovation capacity, willingness to take risks, humility and rigour, values that have been passed on by the company’s founders and are still at the core of its philosophy.
The strength of such values however lies in the people who incarnate them, the company’s true assets: hence Marangoni’s increasing investments in training for employees at all levels.
De Alessandri then highlighted the Group’s international dimension and the fact that it is the only global player (i.e. operating worldwide) among independent manufacturers in the industry, and reference technological leader.

This technological leadership is one of the company’s key points in the Truck and Earthmoving business, and will be further underlined over the coming year through an additional increase in product quality, the expansion of the already vast range of Truck and Earthmoving tyres, and more support for R&D. As stressed by Luca Mai, Sales Executive Manager of the Commercial & Earthmover Tyres division, new retreading compounds offer performance that at times exceeds the levels reached by new tyres, and above all are extremely focused on specific applications.

This role as an authentic retreading specialist makes service a crucial factor in the Marangoni offering: service that increasingly involves consulting, so as to recommend the best tyre for each specific use to final users. Still on the subject of service, Brenno Benaglia also mentioned the major investments made in logistics to maximise efficiency and speed in our response to customer needs.

As a large retreader (the Rovereto factory is one of the biggest in the world), Marangoni sees specialisation and product range as its strengths for conquering important market niches, where its know-how and technological superiority can truly make the difference. It is above all in sectors such as retreading that hard economic times have offered important opportunities.

However, underlying all this is a single, decisive factor that unifies all of a company’s activities and ensures its success: a culture of quality. This was stressed in the closing speech by Giovanni Marangoni, Marangoni SpA Vice President, who outlined the stages in the evolution of tyres that he has directly experienced over a 60 year career. “In over half a century tyres have seen enormous changes, and their evolution has perhaps even exceeded that of vehicles. The modern tyre is a complex system, subject to extreme stress, and in order to carry out its difficult task it needs to be designed and developed as part of a culture of quality: at all times, from production of compounds to use on the road. We are fully aware of this fact, which constantly inspires our work, whether in R&D or the consulting we offer final users on how to best use their tyres”. 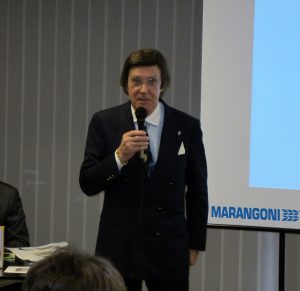