The inauguration, held on 23 March in Kuwait City, attracted a great deal of interest, with attendance by local government representatives, the Italian ambassador Enrico Granara, the Iraqi ambassador Mohammed Hussein Bahr Al-Ulum, the local press, the representatives of numerous transport fleets, Marangoni staff and management. Specifically, interest was shown by those present in the new technology installed and the machinery created and developed by Marangoni for the production of retreads using the RINGTREAD system.
The ITT 2500 shearographic inspection machine for non-destructive testing ensures quality retreads, in fact it identifies exactly which casings can be retreaded and those that need to be rejected, as breakages may occur if they were used for retreading.
The Ringtreader 2500, the other machine installed, allows the ring to be centered on the casing in a simpler way, using a laser sensor to send data to the computer which drives the centering arm.

In addition to the equipment, Al Zahem Industries has also invested in training, so as to create a team of operators who are highly specialised in the repair and retreading of industrial tyres.

Efficiency, safety and quality are the three values that permeate every aspect of retreading at Al-Zahem Industries which have allowed the company to advocate retreaded tyres as valid alternatives to new ones.

Al-Zahem Industries therefore believes that this partnership with Marangoni will represent a further important source of growth and profits, through the possibility to offer users an exclusive and high quality product with state-of-the-art Ringtread technology. The retreader’s mission is, in fact, to help end users keep costs down by using highly reliable tyres that can guarantee improved efficiency and prevent the risk of vehicle downtime. This means that they do not sell “just” retreaded tyres. Mrs Haifa Abdulla Al-Zahem, General Manager of Al Zahem Industries, stated: “The partnership with Marangoni will provide our customers with the best that retreading has to offer: RINGTREAD is the only circular retread. It adheres perfectly to the tyre casing, without joints and any tension or deformation, while ensuring faster processing, less waste and performance which is the same as, if not higher, than that offered by a new tyre”. Mrs Abdulla Al-Zahem continued: “The tests conducted have shown how RINGTREAD guarantees the same or even higher mileage compared to the original tread, reducing the cost per kilometre, decreasing vibrations, while at the same time giving greater balance, better heat dispersion and a tyre that looks exactly like the original one; moreover, with shearographic inspection we can now detect and identify any problems in the casing”.

With its highly strategic position and important port, Kuwait plays a significant role in the road transport business in the Middle East.
The country, at a crossroads between Saudi Arabia and Iraq, is home to large transport fleets, ranging from a minimum of 100 to over 4000 vehicles, which generate large sales volume for the replacement tyre market: retreads currently account for around 16.5% of this market, a share held by Al-Zahem, the only retreader operating in the area.
The partnership between Marangoni and Al-Zahem Industries has the initial objective of reaching a 30% share of the retreading market in the next 36 months, with clear benefits for the environment, as underlined by the Italian ambassador, Enrico Granara, during the inauguration. 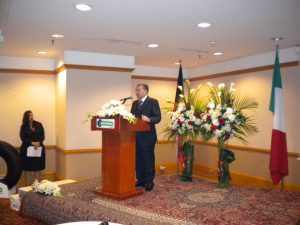 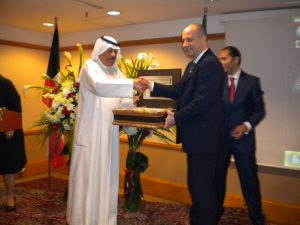