Thanks to special compounds designed specifically for this purpose, high uniformity of the retread guaranteed by the absence of splices and the optimization of buffing profiles and tread patterns, the Ringtread rings grant considerable fuel savings compared to traditional products and help reduce the operating costs born by road haulers.

The head of the Swedish fleet Malmo Transport & Spedition AB (MTS) made some comments after testing tyres retreaded with the Energeco+ Ringtread rings:
“We have been very impressed by the performance of the Energeco+, not only for such a high mileage, at the same level as that of new tyres of the best brands with a similar design and equal application, but mainly for the fuel saving. Thanks to these tyres, retreaded with the Energeco+ 280XXS ring, we have saved a further 5% of fuel, or even more, in comparison with new tyres. Estimated on the basis of the distances covered yearly, we saved approximately 3,000 Euro more for each vehicle compared to new tyres.” 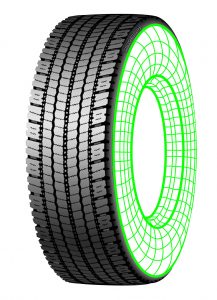